As you become skilled in a task, its demand for energy diminishes. Studies of the brain have shown that the pattern of activity associated with an action changes as skill increases, with fewer brain regions involved. Talent has similar effects. Highly intelligent individuals need less effort to solve the same problems, as indicated by both pupil size and brain activity. A general “law of least effort” applies to cognitive as well as physical exertion. The law asserts that if there are several ways of achieving the same goal, people will eventually gravitate to the least demanding course of action.

…and we say “Well yeah, of course!” Yet, I don’t think we give enough credence to the importance of practicing cognitive tasks, especially when they drive our craft forward. Practice is as important for the coder, designer, writer or manager as it is for the athlete.

A great alternative to the normal (and boring) compact fluorescent bulb. It’s not available in the US yet, but I expect that many eco-conscious homeowners, restaurants and bars will latch onto this stylish option.
http://plumen.com/

Architectures of Control, which provides some very interesting analysis of products that are “designed with features that intentionally restrict the way the user can behave” in order to encourage the user to follow certain practices and behaviors, has posted Slanty design, which is a great introduction to the concept and bridges design in the physical world and design for the Web. It’s a quick, well illustrated article that I encourage everyone, not just designers to read.

For non-designers, it may shed some light as to why some of yoru favorite products and services act as they do. 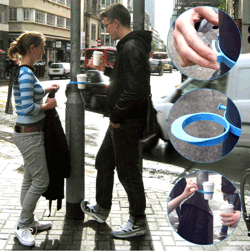 Garrett Dimon’s review of For the People by the People, a book about architecture (buildings not pages) has prompted me to add it to my Amazon Wishlist. Sadly I missed the Campfire chat he had set up to discuss it, leaving me with just a small taste, and ultimately causing me to want to read it even more. It isn’t very often that you hear about online reading groups spontaneously occurring…

I’ll leave you with the quote that Garrett highlighted as that is what truly piqued my interest:

So it is inevitable that as the work of building passes into the hands of specialists, the patterns which they use become more and more banal, more willful, and less anchored in reality.

DNA 11 creates high quality prints from your DNA or fingerprint. The geek in me cries out to hang (at least) one of these pieces on our walls.